The fairy-tale of calculating lotto numbers

Sorry for writing about lotto again, I’m kinda annoyed by that topic too, but since there are people who believe that future lotto drawings could be calculated – like one here in the comments (in German), who kindly provided some details when I asked him by e-mail, thanks a lot – I consider it quite appropriate to go into that.

So this is Mr Galluzzo’s comment, translated by me:

So if you make it more precisely, you would have to give away many details, and who gives anything away would be quite stupid.
You can only learn something if you’re playing yourself.

You don’t have to play lotto in order to look at the numbers, and you can learn without spending money on false hopes, too.

One could also learn by e.g. attending a course or buying/renting a book about “Probability calculation for beginners.” Isn’t there one in the “for dummies” series (whose title is never intended to offend…)?

I think that you are no player, if you were a player with experience, you wouldn’t write such stupid stuff, I already said that.

Oh, yes, the biiig secrets and experiences of “experts”, yeah, sure. As if that would change anything about no lotto drawing depending of the preceding drawings.

But a tip to a precise file(?) to think about, especially for laymen writing silly things.

Take the last two years of the lotto statistics, look closely, what do we see? At 92% numbers are drawn who start below ten, that is 1-9, do you understand that?? If not, look at the 2007 statistics, I hope you hit on it.

(His German is sometimes hard to understand…)

The point is, I think, how often there’s a single-digit number (1-9) among the 6 drawn numbers (or all 7 including the additional number (“Zusatzzahl”, ZZ). Alright, let’s have a closer look at that – for this year, the last 2 years, and all drawings since the unification of Wednesday and Saturday lotto:

The next drawn small number below ten can easily be determined

Oh, sure. The drawing machine does that really easily.

just like series, that is the 1 rarely appears once, most of the time it’s drawn twice in a row.

Oh, the 1 “most of the time” appears in two consecutive drawings?

I wouldn’t call that “most of the time”. And hey, the fact that it occurs a little more often than statistically expecting doesn’z say anything. We’re talking about a maximum of only a few hundred experiments, so these little “outliers” can occur quite easily!

And it does not mean at all that this gives you a basis for “pre-calculating” the next independent(!) experiment!

(Notice: I can’t be 100% certain that, despite all efforts and multiple verification, my little analysis program is without any error. Nobody could. But the numbers are freely available (e.g. at Lotto Bayern at the current numbers, then bottom of page), so anyone who wants can analyse then on their own…)

Back to our “expert”:

So you already have one number that will be drawn the next week and you take that as a base number.

If you’re so certain about that: Aren’t you a multiple lotto millionaire already?

I won’t give away or teach more details, it’s always about much money and not about writing stupid things.

The gentle reader should already have noticed who is writing stupid things here. I only hope that it’s just your own money that you’re spending on such “calculations” and the lotto fees and not the money that would be better used for, say, your family, if you got one.

I’ll fall on deaf ears with “professional players” like this one, no matter how much I write. 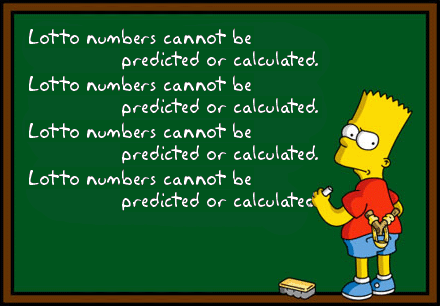 (Originally created at Add Letters, then adapted in size.)