Just a quick computer hint: Since the recent update of the Chrome browser to version 61, the colors were dull on my Windows 10 – not just on the web pages, but also the icons of the user interface. Solution found here:

Open the page chrome://flags, find the setting “Color correct rendering” and change it to Disabled.

(Sometimes something can be too “correct”, it seems…)

Update for Chrome 62: Apparently they changed something again and removed this option – setting “Force color profile” to sRGB seems to do the trick now.

I wanted to show this cartoon for quite some time: 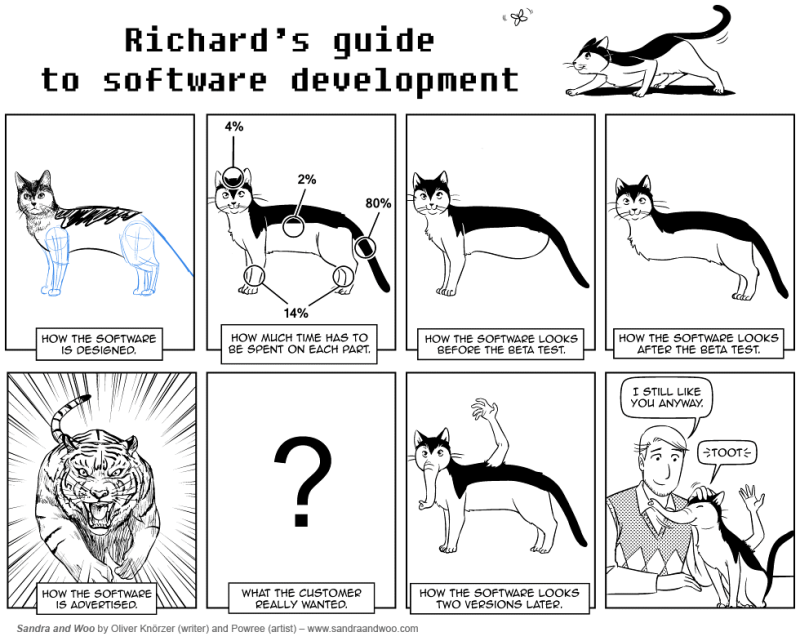 From Sandra and Woo (Oliver Knörzer & Powree), CC-by-nc-nd licence. Actually not that unrealistic…

Thunderbird: No automatic mail receiption with deactivated Lightning and after hibernation?

Since its last major release, the mail program Thunderbird comes bundled with the calendar and task add-on Lightning. Which I ignored at first, then recently disabled. Then I noticed that Thunderbird didn’t check for new mails from my accounts (all POP3) every X minutes, even though nothing was changed in those options. A manual check for new mails worked fine.

At first, I didn’t connect this to disabling Lightning, but apparently that was the cause since after reactivating it, the periodic mail download works again.

I couldn’t find a hint about this connection on the net, so maybe this post helps someone now who encounters the same problem…

Update: After Windows hibernation over night, it again won’t work. Grmbl. What could that be…? At least after a Thunderbird restart, it works anyway (which didn’t help with Lightning disabled)…

They also have other sorting dances.

I thought I’ll briefly write down a tip that helped me yesterday when I upgraded from Thunderbird 3.1 to the new version 5 (which also applies to Thunderbird 6 and also 7, 8, 9, 10, 11, 12, 13 and probably more, given this ridiculous version system) – on WIndows 7, by the way. (This problem might not exist on other systems in the same way.)

TB5 uses a slightly different display for the folder tree and the mail list with a slightly bigger line spacing (which might simply be a side effect of the Calibri font). This may result in slightly better readability, but it also means that there are less mails and folders displayed in the same screen real estate, and since I like to use quite a lot folders to organize my mail collection, this resulted in the fact that not all folders could fit on the screen anymore, and having to scroll is inconvenient – especially since it’s virtually guaranteed that the next incoming mail will be put in a folder that’s currently not visible…

So I quickly searched for a way to change the line height – which is of course possible with the userChrome.css file that’s located in the profile folder1, typically located in C:\Users\user name\AppData\Roaming\Thunderbird\Profiles\profile name\chrome. By default, it probably doesn’t exist, so just create it. And restart Thunderbird to apply any changes.

This CSS code reduces the height such that the display is pretty much like in TB3:

Update 23 Jul 14: Surprise! A change in Thunderbird 312 – there were some pixels added somewhere, now it’s -4px instead of -2px for the same effect.

Since this causes ugly lines to remain between the items when moving the cursor across the tree or list, we also add the following which only applies to highlighted lines:

That’s it. If you like, you can of course use just -1px to reduce the height by only one instead of two pixel rows. (Alternatively you could also split the 2 pixels between top and bottom (margin-top and margin-bottom with each -1px), but then the highlighted line “wobbles” a bit when passing over it.)

Update 6 Dec 2016: Roger (see below) mentioned that this also affects other lists such as the mail address selection when composing a mail – and makes things too cramped there. Solution: Only select the elements you want to change, which are the folder tree #folderTree and the mail/news list #threadTree. Then the code looks like this:

(The aforementioned mail address selection can be accessed with #addressingWidget.)

Update 2021: For Thunderbird 91, you can now reduce the values for the tree again…

By the way, by now Thunderbird offers an option for display density with Compact, Normal, and Touch settings, though Compact still is more spacious than I like.

And a little bonus tip, an entry that I already have for a long time to hide the folder pane header that switches between “all folders” and some other folder views which is useless for me:

(And before you add this entry, make sure you switched to “all folders” because you won’t be able to once the header’s gone…)