When Jesus returns after 2000 years…

…then he must come with an asteroid. What else? 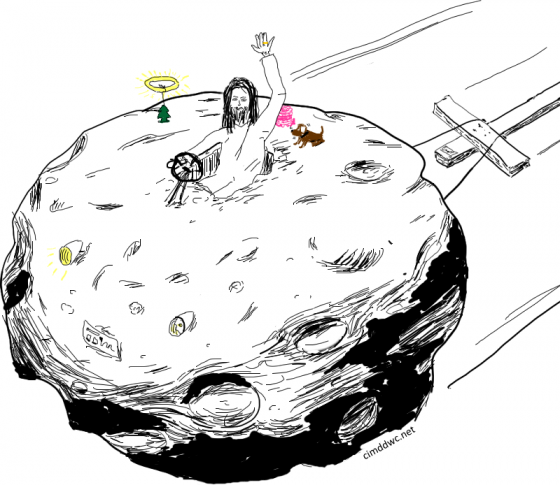 At least, in Konna’s old 2012 post (German) someone named Rolf connected Jesus’s alleged return with the asteroid Apophis (is he really serious?):

Nothing will happen in 2012. […] On the cross, Jesus not only said “Father, forgive them; for they know not what they do”, but also (and that remained secret) “A thousand years will pass and another thousand years. Then I will return. But only the father in heaven knows time and place.”

(My translation.) And those who know how to deal with the problems of time calculation would get 13 April 2029 as result – the day that Apophis will pass Earth. 2029, the new 2012? Certainly, for such a popular asteroid lends itself to such stuff. Question is only how many new 2012s will come in between – for the impatient ones…

But what use would it be to a returning Jesus to fly 18000 miles past Earth on an asteroid? Why an asteroid in the first place? Can a son of a god not afford a more presentable vessel?

Admittedly, Rolf doesn’t mean this connection in such a direct way as my illustration above:

And Jesus’s birth (for salvation of mankind) was announced by a (this?) asteroid (which the three wise men were following), and with the appearance of a (this) asteroid, he will end the existance of mankind.

In the long list of possible astronomical explanations for the star of Bethlehem in Wikipedia, there is no asteroid. (And an asteroid won’t have been moving a long time before the three first Jesus pilgrims, if you’re giving such stories any credit in the first place.) Neither does 2029 exactly fit Jesus’s year of death +2000 (“most bible historians consider 30 the most probable year of death”) nor does the date of Easter, if one wants to be exact to the day.

But do we need to be so nitpicking at all? After all, Jesus wanted to return already in the same generation as his disciples, as these tales stress multiple times. Verily I say unto you: Then the return-believers will once again, inconsequently, re-interpret the oh so true, oh so divine words of the bible for their balancing act between the time that has passed and their escapist hopes, with or without an asteroid – or they refer to “secret”, extrabiblical words right away. And at the latest, the year 3000 will be a good time to make up the next great date.

Apart from these, erm, minor things I’m wondering how someone would know this if it’s as secret as he says – and why a puny asteroid should be enough to worm the knowledge about the date out of Old Bushy-beard in the sky. Could it really be because of what Rolf adds as funnily as impudently (directly in English, by the way):

This is just the perfect conclusion of science and faith, isn´t it?

No, that’s rather a perfect and typical example of how end-of-the-world, prophecy or mysticism believers pick pieces of scientific knowledge and pocket them for themselves without any scientific reason, without any reproducible evidence.

As if science could implant any real meaning into these mythic and fairy-tale prophecies – rather the opposite. But at least this asteroid named after the Egyptian “deification of darkness and chaos” provides a nice symbol for, no offence, what probably happened to the rationalness of those who actually believe in an asteroid Jesus or a Jesus asteroid.

At any rate, those that will have ascended in 2012 have to be extremely cautious that Jesus won’t run over their feet with his asteroid…

Drawing: cimddwc.net – yeah, I scribbled that myself, obviously – licenced under CC-by-nc-sa