Are you desperately looking for the face of Jesus, Mary or similar on a piece of toast to make lots of money from it on eBay? Why not use some help – a toast printer! 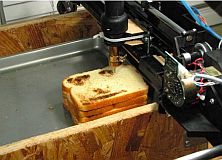 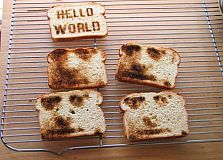 (Okay, that could be fraud. So: don’t use that, or instead sell it honestly

– people who’d spend lots of money on such things either have a useless oddity museum or are nuts. And you don’t have to rip them off in addition to that.)

From Evil Mad Scientist Laboratories who have more pictures and descriptions of their device.

Update: For believers in the Church of the Flying Spaghetti Monster, they also made the matching toast (and offered it on eBay for the fun of it – sold for $26.99):

Why phryganeidolia? According to the Altavista translator, toast means “φρυγανιά” (phryganiá) in Greek, and “eidolon” = image, as in “pareidolia”, so you could call the result by that name…