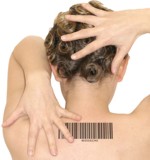 Healing with barcodes – what an exceptionally stupid search query, I thought when I found it in my logs. But I forgot: Nothing is stupid enough to not have been used by mystic dreamers1 and imparted to like-minded people. As is the case here, for you quickly find a book on Amazon (Germany) titled “Neue Homöopathie nach Körbler 3: “Heilen mit Strichcodes”, 8. Körbler-Tagung 2006″ = “New Homeopathy according to Körbler 3: “Healing with Barcodes”, 8th Körbler conference 2006″. (Seems this stuff is mostly unknown outside of the German-speaking countries.)

Quite funny, an electrician(!) in the 1980s calls his imagination of, yes, circuits in the energy current in the human body “New Homeopathy”, and what does it have in common with classic homeopathy? Exclusively the fact that “the therapist and the patient/customer must believe in the method in order to achieve a possible placebo effect” (translated quote from German EsoWatch).

I’m wondering if any homeopath ever sued against that name…

So we got barcodes and symbols instead of globules, dowsing rods instead of talks, scientifically non-tenable “energies” instead of preparations dilluted to complete lack of active ingredients. Well, each mystic to his own…

A Bavarian “health oasis farm” which offers, besides common wellness things, numerous mysticism treatments and seminars, happens to advertise in a current regional weekly magazine (disqualifying its “wellness & health” section with a homeopathy article) also a weekend seminar about this pretended “information medicine” for only 250€, apparently without hotel room and meals.2

What does ‘Ötzi’ the Iceman have to do with the new understanding of healing?

That the “New Homeopaths” used him to promote their stuff; apparently they managed to bend their “knowledge” to match his tattoos.

Ötzi had utilized the principles of energy medicine instead of today’s machine medicine.

Firstly, what should a man who lived 5300 years ago have known about the modern machine medicine, and secondly, how should his mummy be able to refute that allegation about “energy medicine” anyway?

Press comment (from wherever) by Layena Bassols Rheinfelder, August 2006, who is a book author and provider of services in this area herself with something she’s calling “PraNeoHom”:

This book gives the beginner a way to start, to taste, maybe even to open up into engaging in unlimited possibilities.

Unlimited possibilities of self-delusion and/or fooling his fellow men and/or raking in money, one is tempted to add…

Short description:
For all times, Native American peoples have used signs and symbols to increase strength and courage. Also, tattooed lines have been found on wounded body parts of the famous iceman “Ötzi”, and the scanners of supermarket cash registers recognize products by their barcodes… Symbols, simple lines and signs have been used from time immemorial in numerous cultures to transmit information and activate self-healing capacities. […]

Hey, the barcodes are healing cash registers! Great, didn’t know that! Now that should really be the argument against RFID labels!

Amazon.de kindly provides the introduction of “The Force Field of Symbols” – it starts by using a mythological story collection, in this case the Genesis (“In the beginning… God said”, etc.), and the banality that an architect has to have an idea of a house before he builds it as a basis to “explain” via a nice non sequitur that thoughts also have “vibrations/oscillations” and “force fields” and that these are transfered into writings and symbols.

And since this book is about radiesthesia, these oscillations and fields can of course be sensed with dowsing rods and pendulums. But why stick with one bizarre fallacy? The reader needs to see already in the introduction what he can expect in the book!

Now if matter is oscillating, i.e. transmits electromagnetic waves, which can be measured with a dowsing rod, then it’s logical that thoughts, too, which of course are the foundation of all matter in the shape of spiritual concepts, are nothing but electromagnetic oscillations.

Now if you think our modern measuring devices should be able to detect that, you are presented with this convenient evasive addendum which comes as no surprise at all:

However, these oscillations are in a frequency range for which there are no sufficiently sensitive measuring devices available today. But instead, human beings, being the highly sensitive “universal sensor”, are able to communicate with these force fields, in which dowsing rod and pendulum assist the radiesthetic as suitable tools.

Now I don’t know whether that frequency range is specified in the rest of the book, but the assumption that this is not the case is certainly not that far-fetched. (How do they know it’s electromagnetic anyway?)

The tools mentioned are certainly suitable – suitable to make the user’s wishful thinking visible, and nothing more, though.

[…] The mental abilities of radiesthetics make it possible to enter the upper limits that are as yet unreachable for purely physical measuring methods.

For physical measuring methods are unable to fantasize about such things, you still need people to do that.

When working in the mental area, however, the danger of divining mistakes due to wishful thinking as well as physical and psychical influences is big.

That’s readiliy apparent. Already given the measuring method that’s solely based on wishful thinking and ideomotorically induced muscular pulses caused by the conscious or unconscious imagination of a movement, also known as Carpenter effect. (Cf. links below.) Respectable tests with dowsers have never shown significant results beyond mere chance.

Thus dowsing rods and pendulums are anything but scientifically tenable measuring methods, of course independent from whether you believe the statements about the non-existence of physical measurment methods or not.

To keep the error rate as low as possible, the achieved results were checked by other radiesthetics who knew the task but not the results. So only such results are presented here that have passed the blind tests.

Now if these were real (double-)blind trials: respect! But somehow I think that the radiesthetics did actually see the symbols and writings – and, not only thanks to their mystic experience, it is not unlikely that they assess the same shapes with similar results. E.g. hardly anyone probably called wild zigzag patterns highly harmonic, whereas “flowing” might have been found in the description for wave lines more often than if they had just tossed a coin…

So what do we learn from that: Watch your search query logs, lest you miss unscientific balderdash.