Even though the following is just copied from Wikipedia I wanted to mention it, just like other bloggers (and probably many news sites)… isn’t of no importance, y’see:

Schicksalstag (literally day of fate) is a label often used for 9 November due to the special importance of this day in German history. The term was occasionally used by historians and journalists since shortly after World War II, but its current widespread use started with the events of 1989 when virtually all German media picked up the term.

There are 5 major events in German history that are connected to Schicksalstag:

The establishment of the SS in 1925 is sometimes mentioned as having taken place on the Schicksalstag as well.

And in the German Wikipedia, someone already added an item about this year: Telecommunications data retention. (At least temporarily.)

PS.: Want to join the class-action suit against data retention? 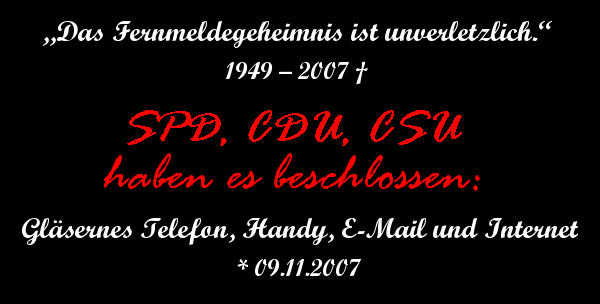