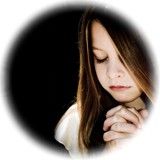 First, this post is about the Misanthrope’s blog carnival (German) about the original “Gretchen’s question”

Gretchen: “How do you feel about religion? Tell me, pray. You are a dear, good-hearted man, but I believe you’ve little good of it to say.”
(Faust, part I, verse 3415)

Of course that’s a topic that you can easily discuss and quarrel about and which has led to way too many religious wars. Let’s hope that e.g. the comments here at Konna’s coincidentally matching post (German) won’t get out of hand like this.

As mentioned here from time to time, I’m an atheist. Of course I don’t mind if others believe, as long as they don’t strive to actively evangelize me or others or seriously harm them or even, as in case of some fundamentalists, want to punish for non- or other-believing; and I’m not too happy about spreading too much antiscientific nonsense like creationism, either…

I need no god, no heaven and especially no church; not even to find a “meaning of life”… what’s the meaning of life for me? Short answer: Life! (And I don’t mean that in an egoistic way.)

“But don’t atheists believe, too?
They believe in nothing, they say.
That, too, is believing, I say.”

I don’t see it that way. Believers “must” believe, have faith in something – in the existence of a higher power, in miracles or other phenomena, for this consideration can be extended towards the paranormal and various pretended supernatural pgenomena –, which secludes itself from rational, scientific access. Atheists – and, with aformenetioned topical extension, skeptics – can do without the assumption of or the belief in such “supernatural” elements simply from the rational side, all pragmatically, since there are simpler, more coherent explanations.

If you want to call this trust in the scientific point of view as “faith” or “belief”, you have to take a very far stretched definition of these words which is lightyears away from the faith that’s the basis for religion; mixing them up must, in a sense, lead to misunderstandings.

For this, see also Phil Plait’s extensive explanation “Is science faith-based?” – you just need the simple assumption that the universe obeys a set of rules (and that you can deduce these by observation) – and the long discussions there…

About the (un-)provabilities of phenomena – and accompanying problems – (and a few other things) I had already written my article based on the Uri Geller interviews on ProSieben.de: “I believe we have been brought here from other planets”
Proof and faith issues and the strange thoughts of Uri Geller.

Finally (for the first part of this post) let me mention the small poll I had here on the sidebar last autumn; its 42 participants voted like this: 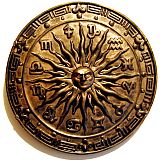 Let’s move on to the other part of the title – astrology, somewhat also as an example for superstition, which I personally don’t think much of, either, “of course”. The magazine Gehirn & Geist (brain and mind) had a poll (which I had mentioned in my links of the week last December) about “What do you think of the power of the star?“ – 464 people participated, and a total of 35% believe that zodiac signs reveal at least something about people. The entire result can be viewed/downloaded here (German).

The corresponding article “Die Kunst der Sterndeuter” (“the art of the astrologers”) can also be downloaded freely. I’d like to mention (and translate) two quotes from it:

“The Australian Geoffrey Dean, who gave up his astrological profession due to sobering findings, analyzed until today over 50 […] attribution studies. His conclusion: His former colleagues were not able to attribute a hososcope that has been created according to exact birth data to a personality profile or a case history any better than a random number generator.”

Also, the fact that so many people consider newspaper horoscopes – which aren’t even created according to exact birth data – appealing is of course based on how they are written:

The tricks of the pros
How do newspaper astrologers manage to have so many readers find themselves in their short texts? Germanist Katja Furthmann identified in 2006 in her doctorate seven linguistic artifices:

And let me also mention my post about a magazine article about fortune telling on TV.