The name says it all!

I can’t help but get that impression when I read that mystic babble (German: Gelaber; the Laber is also a river) in the nearly half-page advert in this Saturday’s Donaukurier: “LABERTALER (Laber valley) Full moon water is life energy”, it says in large dark blue bold print. (All quotes are my translations.)

By the way, I took the liberty to design a can for this beverage with the “Soft Drink Can Generator” that’s currently mentioned in a few blogs.

The moon obviously stimulates the fantasy – especially that of mystic fools and crafty businessmen. I already wrote about “Lady Full Moon” and her abstruse and contradictory meanings in various moon calendars in June.

LABERTALER mineral springs catch the mystic power of the moon in their “full moon water”.

They rather catch the mystically moonstruck – as customers. They did this campaign, by the way, already two years ago with a slightly shorter text but similar layout – see this scan in their press archive.

In this article in the Mittelbayerischen Zeitung about the start of the full moon water filling in early 2006, they said (emphasis mine; and, I repeat, translation, too):

The procedure was not only watched by a notary, but also by about 200 invited visitors who wanted to taste the first full moon filling. “Quite normal” most assessed. Which is logical, according to director Lilo Sillner: “Full moon water does not differ by smell or taste, but by a plus in bio energy – it is more animated. But that’s a matter of faith.“

Matter of faith – correct. The target audience wants to believe such mystic stuff and is willing to pay more money for it (even if it’s just 50 cents per box of 20 bottles of 0.5 l each, as this 2006 article tells) – and wants to deceive themselves once again. And, no wonder, there are vendors who raise and cater to such desires.

The advert, which somehow can’t decide if it wants to imitate a newspaper article or not – it starts with a quasi editorial paragraph including city and initials and ends with “we spoke about this with LABERTALER director…”, followed by the “interview”, but also contains large images and similar things that leave no doubt about its advert character –, is sounding different, less defensive, not only in the headline, but of course in the rest of the text (emphasis and translation mine):

SCHIERLING (nw). Long ago even the highly civilized countries have discovered that a really good life is only possible in tune with nature. Many factors are important and even decisive. One of these factors is the moon with the high importance of its mysterious elemental powers and the positive consequences for well-being. More and more people adapt the rhythm and way of their lives to the return to nature.

For over two years, the LABERTALER mineral springs company is filling mineral water at full moon when the bioenergetic vibrations experience their strongest values.

Vibrations, yeah sure. One of the favorite words of myticism lovers. Bioenergetic, mm-hmm. Scientifically founded and verifiable? Not at all, as usual. De facto, these are empty words intended to pretend real, though nonexistent effects. The only actual effects are placebo effects on behalf of the consumers.

In the “interview”, the director first may waste space with commonplaces – would a real interviewer really ask such a question? – before getting to the details:

Mrs Sillner, when exactly is the full moon water being filled?

Sillner: The LABERTALER full moon water from the LABERTALER Stephanie well is only filled during full moon. Full moon is each time the sun and moon oppose each other with the earth in between.

Wow – now who’d have thought this! (Is this the part of the answers for those mysticism lovers that like to be lulled by simple scientific platitudes?)

From this constellation, the full moon water has a notedly soft and mild taste and it is deepwater of highest purity. 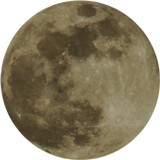 So the water that’s filled on other days from the same well is not of highest purity…? Or is the water exactly the same after all…? I really can’t find an interpretation of this sentence that’s favorable for the company…

Now why is it the time of filling that’s so deciding? The water is under the ground for years to millennia and in the bottle for days to months; what if it gets hit by light from the waning moon in the mean time? Or if it loses light energy to the new moon? Or maybe it’s rather the time when you open the bottle and drink the water that’s most important? After all, that’s when the water gets in touch with the body!

But probably the mystics come up with some “reason” or another anyway.

Now what does the director say what’s special about this water?

[…] with its low common salt content, the segregating of harmful substances is improved.

It just doesn’t differ in that from “normal” water from this “Stephanie well” which is even advertised on their website (in a user-unfriendly “everything in one image” design, by the way) as being low on sodium and cooking salt; the results of the officially accepted chemical analysis are (of course) identical. So obviously the properties of all water from this well is used to advertise the full moon water. Well, well, well, that’s advertising…

What are the experiences with the full moon water?

Sillner: The feedback from our customers is very positive. They confirm that they feel more vital and well after drinking the full moon water, […]

I bet that they wouldn’t notice any difference and just score random hits if they wouldn’t know when the water they drink was actually filled! That’s the deal with placebos, you know.

At the end, the moon calendar is touted:

Sillner: The calendar shows the various phases of the moon.

Well, yes, sometimes it’s cloudy, so a look outside the window wouldn’t suffice. For whatever reason one’d like to know the phase anyway.

Furthermore, it displays the influence of the moon rhythms on the various areas of everyday life.

So it’s either very small (even card-sized pocket calendars can display the phases of the moon) or contains a lot of empty paper. At least if it shows only real influences…

There are hints for the best time to cut your hair,

I’ll give that hint now for free: When it is too long.

Shoudln’t that rather depend on the type of the plant? Or would someone really give his cactuses so much water that would even be too much for a water lily just because a moon calendar recommends watering?

or to cut the Christmas tree.

Well, springtime would rather be a bad time, I guess…

So it’s an important help for all who are already orienting themselves to the moon and want to live more along the rhythms of nature.

Or who want to make themselves dependent on contrived or outdated superstition.

Even if the surcharge is still only 50 cents and you get a moon calendar (which is certainly more expensive on its own) with the box of water – since such a calendar is not worth the paper it’s printed on, it’s still too expensive. Instead, the Laber valley company and various drink retailers add to this little mind-despising full moon power dumbing of the masses and make a little extra income from it. And they abet that mysticism superstition, no matter if they are luring new believers into it or “only” cater to the old ones.