The end is near!

Matching the “divine inferiority complex” post on Wednesday, I scribbled another little cartoon: 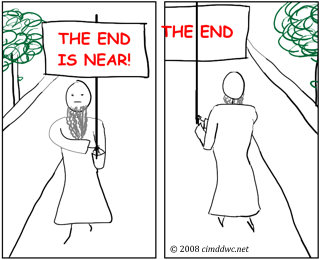 (I really should look for a drawing course…)

The idea is not mine, though; I remember having read a Donald Duck cartoon – short like mine, but better drawn, of course – a long, long time ago where Donald was just an observer added to this setting.

Update: Uwe hinted me at the LTBs (“funny paper book”), when I had rather thought of a newspaper one-liner, and I found it in the Inducks in Spanish; published in Germany in 1986 in LTB 114.