Except for the honor, you can win nothing here – I could just paint a little image like the Prinzzess’s rebus (bottom right corner), if desired –, but I’ll ask you anyway:

Which album title do these pictures represent? 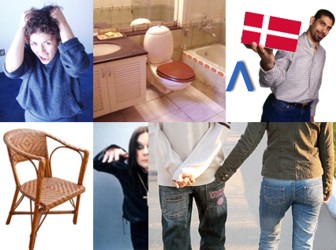 You can also solve it without recognizing this as an album title, of course – hence the question for the band(s)/person(s) is kinda a bonus.

Hint after, well, should’ve been 4½h: For the second sub-image, the solution in German is more helpful, the rest is completely English. And don’t hesitate to guess just parts of it…

Hint 2: The first two words of the solution are monosyllabic and rhyme; they also correspond directly to the first two images, whereas the other four words have no 1:1 relation to the images.
And in my first comment here and one at #*%&$1#$ &§$%=! are two more little hints (albeit in German).

The solution, guessed by Dee

“Mad, bad and dangerous to know”

That’s the title of the second album of The Cross (the former solo project of Queen drummer Roger Taylor), of the third album of the British New Wave band Dead Or Alive, as well as a description of Lord Byron.