In the Lion’s Cellar 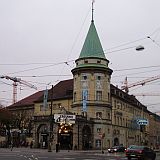 I didn’t want to miss the opportunity to once visit a mysticism trade show like the one currently (until Sunday) open in Munich in the Löwenbräukeller (=“lion brew cellar”), and so set forth this afternoon – and found confirmed that phantasy is basically without limit…

Numerous exhibitors with booths from one to several square meters, coupled with over 100 lectures/workshops (though some are repeated over the weekend) – many of the lecturers are exhibitors, too, of course – should offer something for everybody to get rid of brain cells and money. Now I didn’t attend a lecture, because on the one hand I was afraid to control myself, and on the other hand they are mostly scheduled to last 40 minutes, and that was too long for me, especially since I had to visit the red light district, too.1

So I just eavesdrop on a few booths and have this or that “explained”, or just take a look around, from angel drawings to aura photography, chiromancy (in proper style in a little gypsy tent), cosmetics with living water (including free samples), energy pyramids®, fragrance oils, gemstones, incense sticks, meters of prophecies from a certain Bertha Dudde (free, thanks to donations), rainbow angels, reading the cards, shamanic diagnostics, singing bowls, soul bestsellers, witch accessories and zero-point-energy products from liquidation, to spiritual straightening – everything well-suited for spiritual drilling the customers, if you will.

Oh well, the Energy Pyramids® (always with a ® on the flyer) – a framework of gilded(?) brass(?) rods with a small pyramid upside-down inside a larger one, each with a glass floor. “The key to the 3rd millennium” – hey, thanks for unlocking, now that would have been bad in 2000’s new year’s eve if the doors had remained closed! To enhance the spiritual energies, “proven” with three “aura photos” after different times of application. Available in three different models/sizes (smallest is 18cm) for different goals at bargain prices from 400€ to 2300€. Now who won’t pull out the wallet right away!

And preferrably also order right away: A gilded bowl-like framework (called fountain) that’s advertized to complement the pyramid in an optimal way: 1800€, “plus crystal ball (from 300€)”. Super-bargain, really! The Medien-Markt (German) can pack up and go home!

Then when walking through the isles, I nearly ran into a woman who was standing halfway on the isle behind a sitting customer, arms stretched out halfway, palms upwards about at shoulder height – several minutes without saying something or moving much. I don’t want to think about what might have happened had I disturbed the energetic orientation by jostling her, the energy might have annihilated the entire building!

A large gong was standing at one booth – I almost started to sing “Anyway the wind blows” and hit the gong2, but the concentrated powers of the sound mystics barely was able to keep me from doing it.

And of course there were large tables with ad flyers which I stocked up on, so I got things to write about for the next months… The program schedule for K-TV, the catholic TV station from Austria, was also available – shock, do mysticism and religion have something in common after all??3

So I’ll end today’s post with this greatly matching drawing from Plognark (via Bad Astronomy): 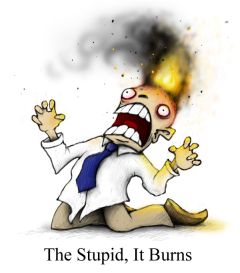