Quote from the children’s page(!) of today’s Donaukurier weekend supplement (with above title, translation and emphasis mine):

„[The ladybug] is supposed to protect the children and heal the sick when it comes flying to them. Who brushes it off or even kills it will have bad luck. It’s not clear if this is always correct. But when it comes to turn of the year traditions, who really thinks about investigating everything seriously?“

Wrong! Especially when such superstitions and similar things are booming, it is a good time to investigate and scrutinize them – and not, on the contrary, uncritically downright endorse them, directly or indirectly!

(In the rest of the article about fireworks, pig and more, they managed to do it better, more explanatory.)

It surely would be hard to investigate that properly in a scientific way – on the one hand, the test person or observer would not always notice such small things as ladybugs, on the other hand, they might know about this superstition, which would bring effects like self-fulfilling prophecies, placebo effects (and its opposite) and selective perception into play.

Apart from the fact that science as well as common sense would not suspect any “real” causal connection, i.e. beyond the psychological effects mentioned above, anyway – not to say likely consider it completely absurd…

Update early Feb.: No reaction ever arrived to my mail to the editors.

Basic Rights and Freedom of the Press

Title of today’s Donaukurier (Ingolstadt) and its local editions: 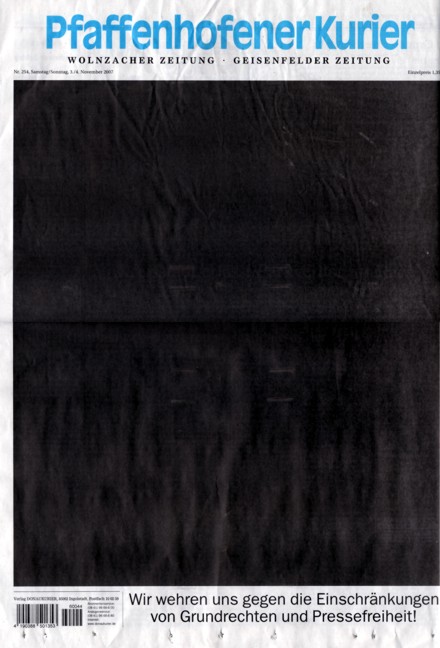 Translation: We object to the restrictions of basic rights and freedom of the press!

“Today the democracy, thanks to govenrmental reglementation fury, sits at the edge of dissolution. Society, media and journalists, too, are watching magnetized and often also inertially what the gravediggers of basic rights and freedom in Munich, Berlin and also Brussels are devising.”