The little black one

Of course it’s not a dress I’m writing about, but my quasi-new Asus EeePC 900 which I mentioned briefly recently – originally bought on June 27, one day after it was released in Germany, for 377 € as a special offer1, but one day later the backlight broke, and it took nearly four weeks until I got that baby back.

On the photo on the right, you can see it on a regular desktop keyboard to compare the sizes – really pretty small and handy. (By the way, don’t let the taskbar confuse you, this isn’t Vista but XP with the “Royale Noir” theme which could (or still can?) be downloaded from Microsoft.)

For “normal use” of surfing, blogging and a little image editing, the performance is more than enough – minor pauses during more demanding operations are understandable, and it’s clear that you can’t type as fast on these tiny keys as on regular-sized ones, but that’s the tradeoff of the size. Only the arrangement of some keys could be better, e.g. the < >, needed quite often when writing HTML, are on the Fn layers of the Y in the bottom left corner (we’re talking about the German layout here), ^° was moved upward and thus the digits to the left, and why the fuck do Pause and Break still need a separate key??2

It was clear to me that the battery life would be rather meager (below 2 hours – didn’t measure it myself completely, but others have done that already, e.g. jklmobile), especially since only the 4-cell 4400 mAh battery is included – but it’s somewhat bad that the Atom CPU version with slightly modified case, the EeePC 901, will soon be released apparently with the larger 6-cell 6600 mAh battery, which, in conjunction with the slightly lower power consumption, results in noticeably longer running times (that is to say, I’d favor the 901 if I’d buy one now)… well, I already had planned adding a stronger battery anyway.

On the left: A screenshot of Firefox with the space-saving yet comfortably operated “Classic Compact” theme – even my longish bookmark menu fits the 1024×600 pixel screen without much hassle. (And the post preview in the background shows what you can expect here in a few days.

The screen is well readable, the resolution is pretty high for the nearly 9 inch. And I’m actually glad I got this model and not the noticeably larger 10″ (also 1024×600) Medion Akoya Mini that discounter Aldi had offered a week later.

What else can be mentioned? After some time, a quiet fan starts; the case doesn’t get uncomfortably hot; the trackpad buttons require a little too much pressure, but usually you3 just tap the trackpad anyway, and it’s got additional functions using more than one finger (e.g. zoom); the power supply unit is pretty small.

First conclusion: I’m basically quite satisfied – apart from the “timeout”, of course –, especially once I got that larger battery. But I can’t give a definite buy recommendation, since Asus and various other manufacturers are releasing new models almost every day…

I consider the models of this year somewhat as generation 1 and “1.5” of affordable mini notebooks – I guess that in a year or so, when we’re slowly leaving generation 2 behind, these babies will get even more interesting. Which, however, is not intended to keep anyone interested now from buying now. 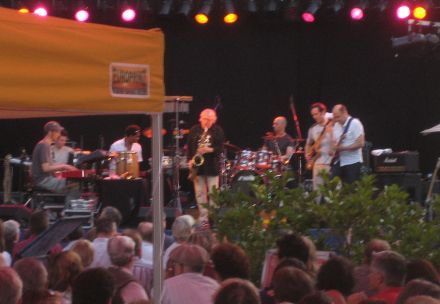 And here’s the corresponding !$text$!:

This thing even appears on the WordPress dashboard: 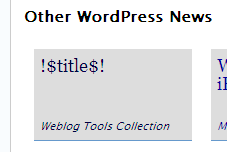 Well, the WordPress for iPhone tool seems to be a little buggy if it creates such dummy posts – see for instance at aptgetupdate and their trackbacks…

PS: No, I don’t have an iPhone and don’t want one, either. At least not at all costs.

Since people keep coming to my blog looking for hints on how to deal with wrong radio controlled clocks and find only my annoyed post about a particular specimen with its stupid programming that lets is be wrong on the days of daylight savings time changes, I thought I’d put together a few hints for other kinds of radio clock problems:

Hope this helps someone… If you got anything to add, note, or correct, feel free to do so in the comments.