“The Next Uri Geller” 2008 for statistics lovers

A few small, somewhat useless diagrams about this mixture of mental-magic entertainment arts, brainwashing of the people by claims of “real powers”, and boredom…

Updated diagram with world final’s ratings (#9) after the German final (#8): 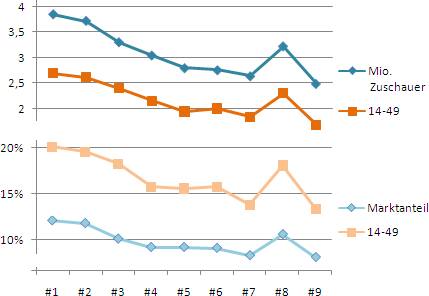 How many overtime minutes did the shows have (compared to the original announcements, not the teletext/EPG data)?

END_OF_DOCUMENT_TOKEN_TO_BE_REPLACED

The ninth show from March 4 – the international competition

As if the shows in various countries had not been enough, this time we are presented with a selection of international winners or runners-up and a for once funny comedian – unfortunately, the celebrities are not that international.

The contestants, next to Vincent Raven, winner of the German show, are Angela Funovits who reached second place in the USA show “Phenomenon” (which had only 5 episondes, by the way) – what happened to the winner, Mike Super? –, Lior Suchard, Israel’s winner („The Successor“), Aaron Crow, “gloomy star” from “De nieuwe Uri Geller”, the show from the Netherlands, and as “surprise guest of the evening” Morta Deller, known from Schmidt & Pocher – well, that really is a surprise that Geller lets Oliver Pocher appear here. Ratings, that’s what counts – and something which may be intentionally funny.

From the preview on prosieben.de (my translation):

Raven father Vincent Raven demands: “I want to fight the best of the best!”

Even if he didn’t want to, he had to, since this was planned long ago…

“All four belong to the best of their craft. But this time, they must push the envelope to earn the title ‘World’s Best Mentalist’”, mystifier legend Uri Geller said. “During this unique live show, not the slightest glich must happen.”

“The most unusual international contest in television history” begins. Lots of cheering and standing ovations, especially for the old spoon fiddler – the audience might have been ordered to do so; but many arguably won’t need that order, sadly.

Uri is overwhelmed by the success and tells about poor little children who shout “achat shtaim shalosh” when they see him on the street. The “poor” didn’t come from him, of course, but from me. And Geller wants to sharpen the viewers’ intuition – you can win some money, too.

END_OF_DOCUMENT_TOKEN_TO_BE_REPLACED

The Next Uri Geller 2008, Vincent Raven – a little résumé

So, now the first German season of “The Next Uri Geller” is over (except for the “international special” next Tuesday) – what was it good for?

On March 4, Vincent – who, by the way, has three ravens: Corax, Asael/Azael/Azrael, Odin – will square off against the winners from Israel, Lior Sushard, the USA, Mike Super, and the still running show in the Netherlands.

Press release for the final and the second season

As announced in the show and in a press release, a second season is planned fo next year – and since the raven daddy surely won’t like to be voted off right away, I guess it won’t be called “The next Vincent Raven” heißen.

Quote (in my translation):

Vincent Raven: “I thank all people who believed in me and my ravens.”

Believed they’d win, or believed that mystic stuff were real?

“All who voted for me can be sure: ‚Shem ham forash!‘ That’s ancient Enochian and means: The wing beat of my ravens will watch over you! In death as in life.”

Well, Uri’s Hebrew is older – for Enochian is just a fantasy language invented in the 16th century (despite its creators and believers may think otherwise). At least it’s astonishing how much text Vinnieboy wants to pack into these three words. You really ask yourself how much of his mystic stuff he believes himself…

From his prize, the “raven father” wants to open a raven farm for injured animals.

So some good result of this show after all.

And Farid, who seemingly can’t afford any family name but Cool, is of course glad about his second place. Nicolai Friedrich, number 3, wasn’t allowed a statement in the press release – no time for losers, ’cause we are the champions…

» Take a look here at all my posts about Uri Geller «

RTL II showed a „Welt der Wunder“ special „Power of the thoughts“ last Sunday with special guest James Randi. The topics were The magic of Uri Geller, Mind reading & co. – Everything just monkey business?, PSI seminar – Mind reading for beginners (with party games and guesswork that’s intended to sell additional seminars at horrendous prices) and Ingenious mind – What thoughts really can do. (For more, in German of course, see the link above.)

Quite worth watching and pleasantly critical for a private TV magazine. But since it was about being against the competition – which, by the way, showed a thematically matching and expectedly myserable “Galileo Mistery” on Friday –, this is apparently possible.

The eighth show from 26.February – the German final

For the final – also scheduled for two hours (incl. commercials) – they came up with something different: the remaining contestants first perform a “big act” outdoors, and after an audience voting to kick out one of them, the two remaining magicians perform again in the studio to find the winner. I wonder if they make do with the two hours…

END_OF_DOCUMENT_TOKEN_TO_BE_REPLACED

The seventh show from 19 February

From the preview on ProSieben.de – with an interview with Uri’s daughter:

When she appears in this show, she must have inherited some of his “talent” of pretending mystic powers. But she is (even officially) an actress…

What will be the “unique mental experiment” (ProSieben’s word choice, of course)? Together bending a large spoon for which the physical powers of daddy alone are not enough anymore?

From the interview (my translation):

Do the Gellers eat their soup only with chopsticks?
(laughs) It hasn’t come this far yet. But seriously: I experienced it a thousand times when I wanted to get a spoon and opened the cutlery drawer that everything inside was bent – from the dessert spoon to the giant soup ladle. My father can’t always control his enormous mental powers.

That was bound to happen…

But even Uri’s “powers” are limited:

That’s why we’re eating at home always with platinum cutlery especially made for us, which handles two centimeters thick. Nothing will bend there, for sure!

Furthermore, Geller’s spoon bending sometimes affected the spoon’s cup – or are they as thick? I imagine that’s pretty uncomfortable…

What are you going to show us this tuesday?
Together with my father, I want to build up a telepathic connection into the German living rooms. And the nice thing about it: Every viewer can participate – and get in close mental contact with us …

No, I’m not saying anything about other kinds of close contacts with this 25-year-old actress. As long as her father’s envolved, that ain’t gonna be nice, anyway…