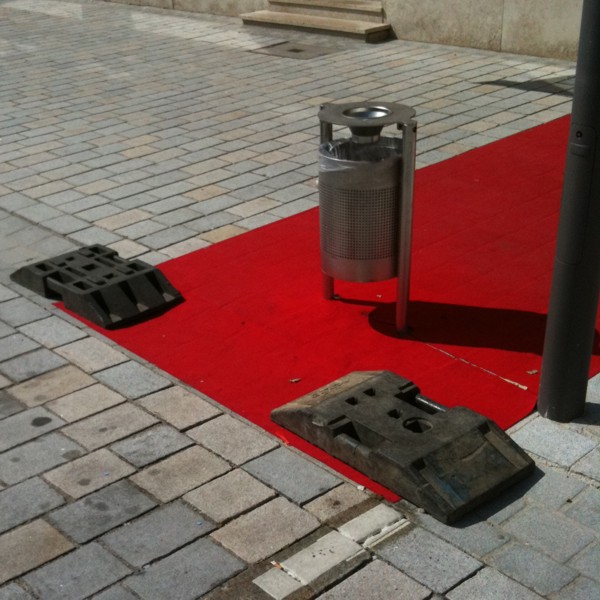 A red carpet for the hairdresser’s customers! But a rather inglorious beginning, isn’t it?

At least a part of the music world certainly is in a state of shock today after Michael Jackson’s death yesterday (no, I’m not really including myself in this part)… I personally liked his music in Thriller and Bad times to some extent, but that’s not what this is about – neither is his, erm, partially eccentric, insane and dubious lifestyle especially in later years –, but instead it’s about Michael Jackson and Freddie Mercury, for they were actually friends for some time and recorded a few songs together – which, however, were never released this way, since that friendship ended when Michael got so successfull with Thriller, and as far as I remember, different ways of life also mattered…

Anyway, there is a quite nice demo version of “State Of Shock” (still-image video) as duet by Freddie and Michael which the latter later recorded and released with Mick Jagger, and a demo of the Queen/Freddie song1 “There Must Be More To Life Than This”, which, however, isn’t that great in this duet version, hence here also the link to the final Freddie version; Jackson wasn’t that great on ballads anyway, now was he? I wasn’t able to find the third song that is said to exist, “Victory”.

Brian May wrote on his blog-like “Soapbox” a few words about Jackson, if anyone’s interested.

Time for the final tonight (finally!) – “the viewers will decide who will win the title and 100,000 Euro” –, and the three finalists out of the originally 10 contestants are:

Manuel Horeth – wants to start “an impossible mission” “aside from the stage” –, Jan Becker – wants to “create a lifetime connection between two people” (oh dear, that’s gonna be a long show) – and Ully Loup – who allegedly “has only one true friend”, his dog Sina, and who “wants to raise emotions” in his audience, today again with contacting “the crown prince of hell” (see Pro7 newsflashes).

Also the Hungarian David Merlini, invited by Uri Geller, will perform a “spectacular escapologist act – playing a dangerous game with fire”. Or a “specatucular” act, according to the press release.

His extreme achievements so far are said to be:

He holds the underwater world record (20 minutes, 39 seconds), spent 33 hours tied in a block of ice and already covered a 100 meter distance in a burning car.

END_OF_DOCUMENT_TOKEN_TO_BE_REPLACED

Manuel Horeth, Jan Becker – “knows exactly what’s going on in those in front of him” –, Jan Rouven – “dangerous play with fire” – and Ully Loup.

This is already the semifinal – one more show next week, and that’s it. As they said last week, there will be no “battle” against last year’s winner Vincent Raven due to his health status.

According to a “TV Guide” poll (via Pro7), 32% of all Germans believe in supernatural phenomena – well then, may those enjoy being dumbed even more by this show if they really believe these are no tricks or sleights of hand. If there is still any hope for some undecided ones: also the links below will help you.

END_OF_DOCUMENT_TOKEN_TO_BE_REPLACED

Show number six tonight, and no press release this time either, despite the mishap last week when a trick was canceled.

Of course the remaining five contestants will perform: Manuel Horeth – wants to “prove that fear weighs heavy” –, Waayatan, Jan Becker – wants to sense the “energetic trace” of fingerprints, greetings to mysticism fans –, Jan Rouven and Ully Loup – he reportedly “feels hurt deep inside when one of his competitors must leave the show.” Though I don’t think he will leave himself voluntarily…