My numbers were collected by Blogcounter.de since late August – with the advantage that they do not count my own visits, so that doesn’t blur the data.

IE (all versions put together) dominate here too, but the share of Firefox/Mozilla is higher than in the Webtrekk statistics (“sonstige” = other): 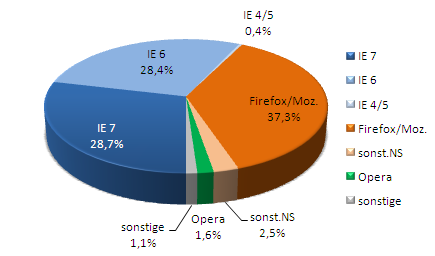 END_OF_DOCUMENT_TOKEN_TO_BE_REPLACED

Mainly thanks to the favorite/link campaign from earlier this month. Before that, I had just an authority of 2 and a rank of 2,500,000 and change.

And what’s the meaning of all this? Correct: Nothing! .

Good that I’ve configured my FRITZ!Box 7170 and my ISDN phone with answering machine such that I don’t get disturbed by calls to my (published) main MSN that do not transmit their caller ID, which in virtually all cases are call centers and others who rather stay anonymous (my relatives with old analog connection are few, and they know a “secret” MSN) – they only hear an appropriate message, and except for some pseudo-raffle robots, only once someone said:

“Not bad, this answering machine.”

Using the FritzBox’s call list, I now created a little set of statistics:

In the previous 6 months (26 weeks), there were 102 such calls, that’s 3.9 per week, although fluctuating quite heavily between 0 and 12. Just one coincidentally hit the “secret” MSN, five (at regular distance on two days, so it was the same call center) on the third MSN where a fax is connected only occasionaly. Only once the “number” 049 was transmitted, once one from Cologne from a robot.

Here’s a breakdown by weekday, time of day, and calendar week: