One could start to believe that Turkey is apporaching America (and somehow also Germany, unfortunately) regarding the utilization of lawyers and courts: The mayor of the city of Batman in south-east Turkey wants to sue the producer of the Batman movie – that is, the comic hero movie – because the name was used without agreement from the city.

Apart from the wee fact that Batman, the comic hero, is almost 70 years old and the Batman man is a little late – why sue at all? Why not use the homonymy touristically, for advertising? How about a Batman amusement park in Batman?

Oh, no, probably the Batman people are afraid that those owning the comic rights sue them – or demand horrendous license fees – if they’d use Batman just like that for Batman…

Hopefully he manufacturers of baseball and other bats don’t jump on the bandwagon. Or pet shop owners. Or Dracula.

I’m combining a few “personality tests” in this post:

First, the test for the “Wall-E” movie – probably I’m one of the last German bloggers to take it… sorry, it’s German only: 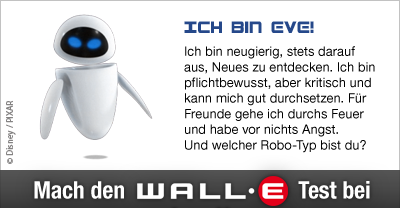 What Gender Is Your Brain? (this one’s in Englisch; via Tshalina.)1

You have a total boy brain.
Logical and detailed, you tend to look at the facts.
And while your emotions do sway you sometimes…
You never like to get feelings too involved.

And also via Tshalina these tests from Fit for fun (German; I didn’t translate the full result texts):

How accurate these results are, well, let’s leave aside that question…