“The Next Uri Geller” 2009 – Summary and Statistics

So Jan Becker, “the master of thoughts” with the apostrophe haircut, is the winner of the title and the 100,000 Euro prize money. With his combination of magic tricks, cold reading and overly pompous pep talk, he seems to have appealed to the audience (always assuming the results were not manipulated), but rather appaled me… Though through this talk he somehow is a “worthy” successor to Uri Geller in a stricter sense.

Well, successor – successor to Vincent Raven, last year’s winner (who didn’t get fit quickly enough after his stroke to compete as originally planned), successor to Geller himself who however doesn’t seem to have any plans to retreat from stage, thus not really needing a successor at all. But the show needs a title. Even better would have been a kind of “Germany’s magic idol”, I think – no “mysterious powers” jabbering, no Geller’s dumbing of the masses, but simply honest magic art fascination. But that’d be nothing interesting for ProSieben, and they wouldn’t have attracted a known name like Uri Geller to advertise the show. Then again, he’s rather got the qualities of a red rag now, I guess. Maybe he’ll find a new home on Astro-TV…

A reason for Ully Loup’s, probably quite a few viewers’ favorite, loss yesterday was probably that he just did some little electricity game that didn’t fit the image as “madman” with hidden emotions that he built over the course of this season at all. I generally don’t like the way they did it with taped performances in the final, anyway.

At any rate, the show got what it deserved, that is: 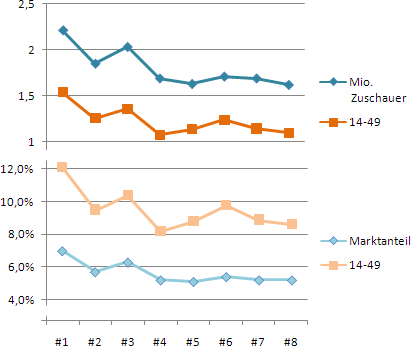 The best ratings this year (at the 1st show) were lower than the worst ratings last year, and they didn’t improve even for the final – so it would really be a miracle if there will be a third season. (Cf. press reports below). They didn’t say anything about it in the show yesterday.

Also, some shows were shorter than planned, there was no long overtime like last year.

No detailed statistics this year, I just want to mention that the number of page views for my reports were clearly below those of last year too. However I still could note several hundred views per show with 40–75 simultaneously during the shows – so here again thank you for reading and commenting.

All are German reports, title and quotes my translation:

Monsters & Critics: «The next Uri Geller» will be the last one:

The TV station ProSieben does not make an official statement about ending the show, a spokeswoman only said: «We will continue to work with Uri Geller.»

In general, that may sound horrible – just think about the terrible alien show – but given the ratings, I don’t think there will be a lot to follow.

Even though the then ProSieben boss Andreas Bartl grandly announced in spring 2008 to have made a long-term contract with Uri Geller and plan more projects with him – a continuation for “The Next Uri Geller” is highly unlikely, given the miserable ratings this year.

» Go to all my posts about Uri Geller. «