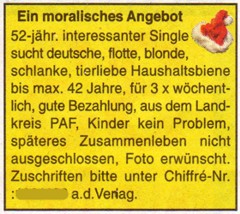 For what does he want her? 3x? Household help, but with these specific properties and living together? Hmm…

From the classsified ad section “miscellaneous” of the Bayerischen Taferl, one of the local weekly ad newspapers, not the first time source for odd things:

Translation: Meditation in advent time a topic for you? Phone…

I considered calling for fun, saying “No” and hang up immediately – then I saw this one, too, in the same block of about 40 ads:

Familiy Constellations with a difference!

To this, my reply would be “No thanks, don’t want your nonsense“.

There were even more such ads scattered around this block with the same phone number (didn’t find a web site for these offers, by the way):

Angels – a topic for you?

So we’re back at the simple “no”. At least when considering how this question is meant, since it actually is a topic since I’m writing about it here.

I almost missed this one (actually the second of these), showing the lady’s versatility:

These come in handy – in German, that is, ’cause there’s the proverb of “tying a bear onto someone” = to hoax someone, which she’s probably gonna do for the other things she’s offering…

Hey dude, then go to a clockmaker or have one come to you – Yellow Pages might help finding one – instead of laboriously putting a small ad in the newspaper!

Another kind of wishing

Recently in one of the local weekly ad papers (Pfaffenhofener Anzeiger from July 2; my translation):

Novena to St. Clara. Light a candle on 9 consecutive days and pray an Ave Maria, express two desires that seem impossible to you and one desire that is dear to your heart. Let the candle burn all the way down on the 9th day and publish this message. Your plea will be heard.

(If the candle industry is behind such ads?

Can also be found in the same or similar words at various places – for instance in this astrology/mysticism forum of a German women’s site where someone expresses (for fun?) this plea, among others (again, my translation):

As if mystics and astrologers never write pompous texts! And topically it matches quite well, I really don’t know what she’s complaining about…

No matter if it’s an imaginary “law” of the universe – as in various mysticism books that I already mentioned in my satire here – or imaginary heavenly helpers, I think it’s despicable to give people who may be in emotional or financial distress false hopes with more or less ridiculous rituals that their wishes would be fulfilled “just like that”.

May be that certain rituals may help some people to accomplish certain goals which they can actually influence themselves – do more sports, be more friendly, “become a better person”, etc. –, or also help for some minor illnesses through a placebo effect. But hoping that the world (the universe, heaven) would be at their service and grant arbitrary wishes is just a false hope that they are being talked into with such mystic or religious “methods”.

Particularly since this novena text (by the way, why an Ave Maria towards a Clara and not directly to Mary herself?) may make the impression which “lavendelmond” expressed in this women’s magazine’s site’s thread this way, though apologetically (my translation):

for me this sounded so “magically-forcing”… do this and that, then “the universe/MotherMary/the Lord” must do etc. etc.

it just reminded me of one of these many unbearable chain letters with false promises that float around the net, hence my comment, no offense meant ;-)

When she’s right… better said, was right, she renounced that opinion. Unfortunately, for where’s the difference regarding false promises?

Before, she had written:

just pray, with all your heart, and trust that god’s will be good for us, even if we can’t recognize that immediately every time

Well, there’s the proverbs “Heaven helps them who help themselves” and “The Lord walks mysterious ways”? A nice excuse for nonfunctional prayers, I think, because those who already helped themselves, thus taking their fate into their own hands, can also easily do without heavenly intervention which he wouldn’t be able to recognize as such anyway, if it occured at all, that is.