“I believe we have been brought here from other planets”


Proof and faith issues and the strange thoughts of Uri Geller

The quote in the title is from an exclusive interview with Geller on prosieben.de which forms the basis for this article (in German – all quotes are my (re-)translations).

Or he’s trying to. For a “general public”, a “broad mass”, which corresponds to the target audience of the private TV stations and tabloid papers, this may hold true. Thanks to the internet, and YouTube & co. in particular, he can’t keep up his hard course that included many unfounded lawsuits against critics.

For instance the suit over 4 million US dollars in 1992 against book authors which was dismissed after two years with a (much smaller) punishment against Geller, which he had refused to pay, or a suit over 15 million against CSICOP (now CSI, Committee for Skeptical Inquiry) because of a statement by James Randi who said he had found a trick that Geller used to fool even respected scientists on a cornflake box.

(In German, you can read this and much more on the GWUP’s page, the German equivalent to CSICOP.)

Of course this doesn’t keep ProSieben from the brainwashing track of “all real powers, no tricks”, for which they rightfully got the (unfortunately too unknown) “Dodo of the Month” (German), an award for brainwashing of the people.

So is there a logical, scientific explanation for where your supernatural powers originate?

No explanation, but there is evidence for my powers. […]

END_OF_DOCUMENT_TOKEN_TO_BE_REPLACED

As always, in general: These are all tricks, no supernatural powers! And we’ll see how good and entertaining today’s tricks are… today, all six who are left in this mentalist race perform, and thus the show is planned to last two and a half hour (including commercials).

The show starts with a warning board:

Translated: WARNING! Several live experiments of the following show are LIFE THREATENING! Only professional mentalists can execute these experiments.
NEVER TRY THIS AT HOME!

Life threat or no – calling the magic tricks “experiments” is ridiculous, though unfortunately fits in the scheme ProSieben and Geller are using in this show.

Loki and Helmut Schmidt had been reported smoking this week (no wonder) – and they have reserved two seats for them, with Geller promising that if they come, he’d guarantee to make them stop smoking.

Uri raves about the many “normal” people that thanked him for their smokelessness.

The most frequently asked question is passed along: “Uri Geller, do you have supernatural powers?” – Answer: “Stephan, of course I have no supernatural powers”, plus an extreme wink in his eye. Meh. “Solved once and for all”? As if! Better had done without that rubbish.

And I hope I never need the help of the three chief physicians who attend the show to pretend credibility – called “the incorruptibles” by ProSieben. Ha! If the invitation to appear on TV and sit almost in the front is no bribe, then what is?

New: After each performance, the viewers can vote (for 2 minutes).

END_OF_DOCUMENT_TOKEN_TO_BE_REPLACED

As always, in general: These are all tricks, no supernatural powers! And we’ll see how good and entertaining today’s tricks are… today, the four “survivors” of the 2nd show performed again.

The smokers’ willpower is to be incited – Geller’s energy and the energy of all viewers is supposed to help.

Especially children and adolescents shall help – “more later”. And Verena Wriedt in the telephone central is again happy about the big feedback with a few questionable cellphone videos of which Uri thinks they’re real.

Celebrities today: “The most successful female boxer of all times”, Regina Halmich, “Monrose” singer Senna Guemmour and ProSieben presenter Oli Unknown. Erm, unknown to me, I neither understood what he said nor do I want to rewind again. Ah, “Stars on Ice” host. So *google* Oliver Petszokat = Oli P. And three state attorneys from Cologne are lowering theit respectability on the second couch.

END_OF_DOCUMENT_TOKEN_TO_BE_REPLACED

First, a little poem of mine:

these “powers” are – shtaim! –
not worth a mere dime

And a perfectly matching current cartoon by xkcd: 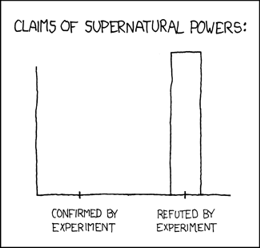 Skeptiker (GWUP) and Stern report about the contracts – among other things, the contestants would originally have had to sign that they “have distinct mental and intuitive abilities, such as mind reading, telekinesis, sugestion or autosuggestion”.

In my first show’s summary, I was wondering:

The question is how much the contestants are behind the “real powers” balderdash which also was clearly shown in the short films introducing them – or if they rather submitted to the show’s demands.

And checked their websites. I should do this for the other five contestants, too, of course (my translations):

And I still think: In any case, a magician who doesn’t think too lowly of himself should not have applied for such a show in the first place.

Geller about his powers

On the one hand in an interview of the Berliner Kurier (all my translations):

“? So you do have telepathic abilities?
! Without a doubt.
[…]
I beleive I had been given an extraordinary paranormal energy.”

On the other habd in the Magische Welt (magic world), the independent German magazine for magic artists:

“I don’t claim anymore that I have supernatural powers. I am an entertainer, I want to do a good show. My entire character has changed.”

The show from 15 Jan

At the beginning, press reactions are mentioned and shown in the background – only briefly and only positive ones, there must be a relation.

And did Geller really say, “we don’t claim to have supernatural powers, we just want to enjoy it”? So really the new, more conservative line, if you will? (Cf. above.) Well, hopefully not the most interesting thing this evening…